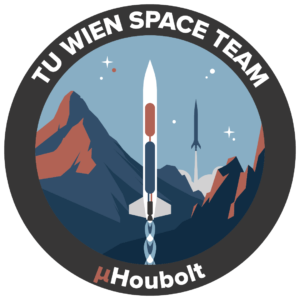 µHoubolt is our very first rocket to fly with our self developed liquid rocket engine. The engine uses ethanol as fuel and nitrous oxide as oxidizer, the propellant is pressure fed by nitrogen. Our long term goal of the TUWST is to reach space with a self-developed liquid-fuel rocket. µHoubolt acts as our entry point in the world of liquid-fueled rockets – it was designed to face all the challenges of flying liquid on a small scale. This agile approach allows for faster and cheaper design iterations and paves the way to our liquid-fueled space rocket Houbolt. 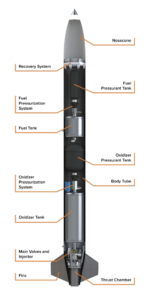 The mission goal is to build and launch a liquid fuelled rocket designed to be as simple as possible. Due to the Houbolt concept, the following requirements must be met:

The airframe was designed to first of all be as lightweight as possible to help with a sufficiently high rail exit velocity and secondly to be as simple as possible to not complicate the launch preparation procedure. This ensures that we can focus on the preparation of the more complex propulsion section.

The nose cones core is 3D-printed with PVA, a water-soluble filament. After laminating it with glass fiber reinforced plastic, the core gets removed by dissolving it in water. Small scale tests appear to be promising.

We plan to mould the fincan with the help of our sponsor Peak Technology, similar to STR-03. A detailed description of the procedure can be found here.

The carbon fiber reinforced plastic main tube has a diameter of 123 mm and cutouts for refueling the tanks. Rail buttons guide µHoubolt along the launch rail.

µHoubolt uses a clamp band for recovery. Twelve v-clamps are bolted to a metal band. The ends are joined together with a piece of string to hold the nose cone and the body tube together. The clamp band is tightened with a tangential screw. At apogee, a CYPRES line cutter cuts the string to allow the metal band to relax and the nose cone to separate. The two coupler parts and the clamp band are machined in house. We have already proven the idea to work by using a prototype of the clamp band in our experimental rocket STR-10 Leonor.

After separation, slingshot elastic bands eject the nose cone to allow the drogue to catch wind and to decelerate µHoubolt to about 20 m/s. 300 m AGL a second line cutter frees the deployment bag of the main chute, which gets pulled out of the body tube by the drogue. The main chute will decelerate the rocket to 6 m/s.

Due to issues in sourcing nitrous oxide and the inherent risk of thermal decomposition of nitrous oxide we conducted tests at cryogenic temperatures to evaluate the use of liquid oxygen (LOX) as oxidizer instead. The first version of µHoubolt will not fly with LOX, as the design is already too mature for such a change. However we intend to use LOX in the next iteration of µHoubolt.

The propellants are fed from the propellant tanks into the combustion chamber by means of pressurization with nitrogen. The nitrogen is stored in high pressure vessels and regulated to the required working pressure of the tanks. This method represents a less complex option in comparison to other feed methods. In rockets as small as µHoubolt, it has the additional advantage that the increased mass of the more robust propellant tanks is far outweighed by the absence of other components like pumps, a gas generator, electric motors / battery, etc.

As these parts have not been made for use in rocketry and no detailed performance data is available, it first had to be evaluated if the components are able to supply the necessary pressure as well as mass flow rate. These tests have been successful, meaning these commercial off the shelf components are viable for use in µHoubolt.

The heart of the vehicle is our in-house developed and manufactured liquid rocket engine. As this is the first engine of its kind in use by the TU Wien Space Team, a lot of validation and testing has to be done to ensure smooth operation for the actual launch of the rocket – to facilitate this, the test stand TS02-500N has been developed and manufactured by the team.

µHoubolt is powered by the engine “Amalia”, with a thrust of approximately 500N. The oxidizer is fed into the center of the engine from above and passes through orifices that are used to regulate the mass flow and decouples it from the pressure in the combustion chamber. Fuel is fed into the engine from the side through a cavitating venturi, which serves the same purpose. The propellants are then introduced into the combustion chamber through an unlike-doublet impingement injector, where streams of oxidizer impinge with streams of fuel to mix and atomize.
Propellant flow is controlled by two ball valves actuated by electrical servo motors, allowing the startup sequence to be configured precisely in software. The engine also includes redundant internal pyrotechnic ignition charges, avoiding the need for placing igniters through the throat and externally wiring them to the launch pad or rocket.

Capacitive cooling is even simpler. By having enough heat capacity, the combustion chamber simply withstands the exposed heat without getting too hot. The drawback is that the resulting engine is much heavier, creating problems with aerodynamic stability and reducing the overall rocket performance. Film cooling on the other hand utilizes a film of a fuel-rich mixture close to the combustion chamber walls which evaporates and burns at a lower temperature, essentially shielding the chamber from the intense heat of the main combustion. To implement this, a more complex injection system would be needed, so we prefer the simpler ablative cooling method.

A cooling method that wasn’t considered due to being unsuitable for such a small engine (and difficult to manufacture) is regenerative cooling, where one or both of the propellants flows through cooling channels in the combustion chamber walls before getting injected to be burnt. This method will be considered in the future for larger engines.

The avionics of µHoubolt are used to control the vehicle. Data is collected at multiple places in the rocket using a wide variety of sensors and compared with expected values. “Avionics” is the umbrella term, which in our case is divided into five sub modules:

The launch pad, in addition to its own control system, contains the connections to the rocket (power supply, data bus and filling hoses), which can be automatically disconnected and retracted. The oxidizer and pressurant filling procedures are fully automated to avoid the need for personnel to be present, increasing safety. A hold down system is also integrated in the launch pad, which only releases the rocket if the engine performance after ignition is sufficient for a safe liftoff.

Check out some Videos of our Propulsion Team working on the test stand for the µHoubolt rocket engine:

Want to join in? Write us an email at office@spaceteam.at!