The next instalment of the STR series is the STR-05 “Fury”. The sixth rocket in the series celebrated its maiden voyage in Manching, Germany, and reached an altitude of 500 meters with an AT I285R motor.

Following the success of STR-04 the previous year, which flew with a dummy motor in the upper stage, STR-05 was intended to be our first successful two staged rocket, which meant that a lot of new strategies had to be developed. The electronics mounter was split up into several modules, allowing for easy rearrangement of the modules within the rocket. An igniter was also designed, allowing for the ignition of the second motor once the rocket had reached an appropriate altitude and attitude.

Due to some last minute changes, Fury’s airframe material had to be changed from carbon fibre to reinforced PVC. With a 2.74 meter long, two staged, PVC rocket, the team made its way to the annual C’space competition. 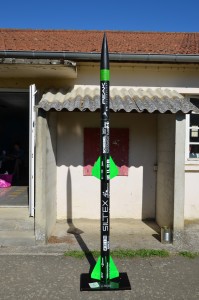 At the competition itself it was apparent that the rockets PVC airframe was not capable of withstanding the bending tests of the competition. Due to time constraints and the anyway modular structure of the electronics mounter, the decision was made to fly Fury as a one staged rocket. Fury was rebuilt within 24 hours, however not all electronical problems were solved within this time frame. Thus, the decision was made to postpone Fury’s maiden voyage to a later date in order to not risk a ballistic flight. 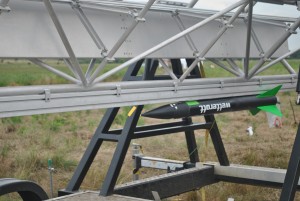 One month after the C’Space competition the Space Team attended the rocketry days in Manching, Germany, organized by the Arbeitsgemeinschaft Modellraketen and Solaris-RMB. With enough time to iron out the remaining software problems and a fresh coat of paint, Fury’s maiden voyage was celebrated on the 22nd of August and reached an altitude of 500 meters. 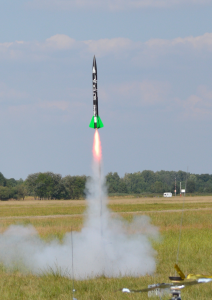 Details on the upper stage

Details on the lower stage

Details on the rebuilt rocket in Manching