TS01-70N is the first test stand built by the TU Wien Space Team to facilitate the development of small scale prototype rocket engines. The project has introduced a new era of liquid rocket engine development for Space Team and thanks to the now available test platform it was possible to take our first steps in the area of liquid rocket engines with the engines “Thor” and “Proteus”. Thor was designed to use compressed air as oxidator and ethanol as fuel, as it was a cheap, safe and easy to handle fuel mixture – it also wasn’t the most efficient, but for the first tests it was perfect. With Proteus we started switching to NitrOx, which is compressed air that is saturated with oxygen which increases the performance of the engine and brings it more in line with our goal of using nitrous oxide as oxidator. Due to the limitations of the test stand both Thor and Proteus had a maximum thrust of 70N, which is far too low to launch a rocket, but is enough to demonstrate that Space Team is able to design, build and even more importantly, safely operate machines of this complexity without outside support. In 2019 the test stand was decommissioned and replaced by the TS02-500N. 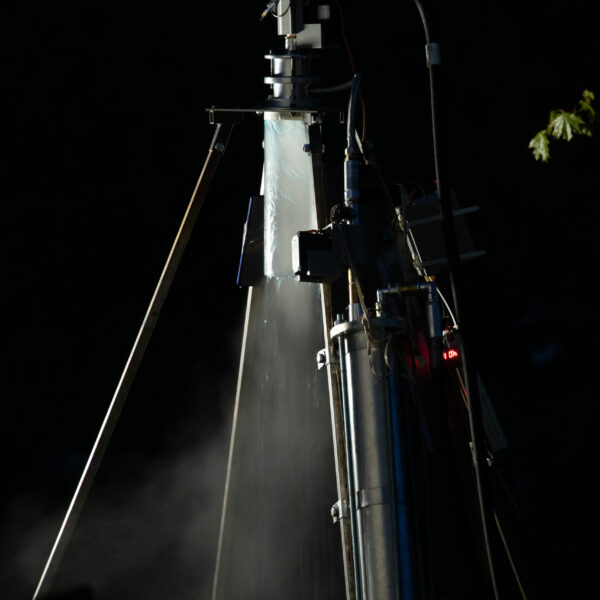 March 2018: After three months of building the LE-01 Thor engine, the first cold flow test (without ignition) is carried out. For safety reasons, a water / compressed air mixture is used first. With the help of a transparent back pressure chamber, the flow behavior can be observed and documented under realistic conditions.

March 2019: The new LE-02 Proteus engine is put into service. Due to its modular design, the engine is primarily intended to test various combustion chamber and injector designs.

In the further course of 2019 the test stand was upgraded in many ways; the sensor system was improved and a capability for thrust vector measurement was integrated. The latter was implemented using three load cells on which the engine is suspended and which record the forces that occur during the test. In addition, three piezoelectric pressure sensors were installed, which measure the fuel, oxidizer and combustion chamber pressures. With this equipment, the Space Team achieved the first stable combustion in late summer 2019.