For future development of engines of the size necessary for the suborbital rocket Houbolt, a larger test stand is in development. To have abundant capacities for future projects, the test stand is constructed to handle a thrust of up to 24kN, which makes it the largest of its kind ever to be used in Austria. For maximum flexibility it can not only be operated with the propellant combination Ethanol/Nitrous Oxide which is planned for the Houbolt rocket, but also with any other usual combination like e.g. Ethanol/LOX (liquid Oxygen). For more flexibility regarding the test location, the frame is mounted on a trailer which enables repair and maintenance work to be done at the workshop and reduces the requirement for the test location immensely. 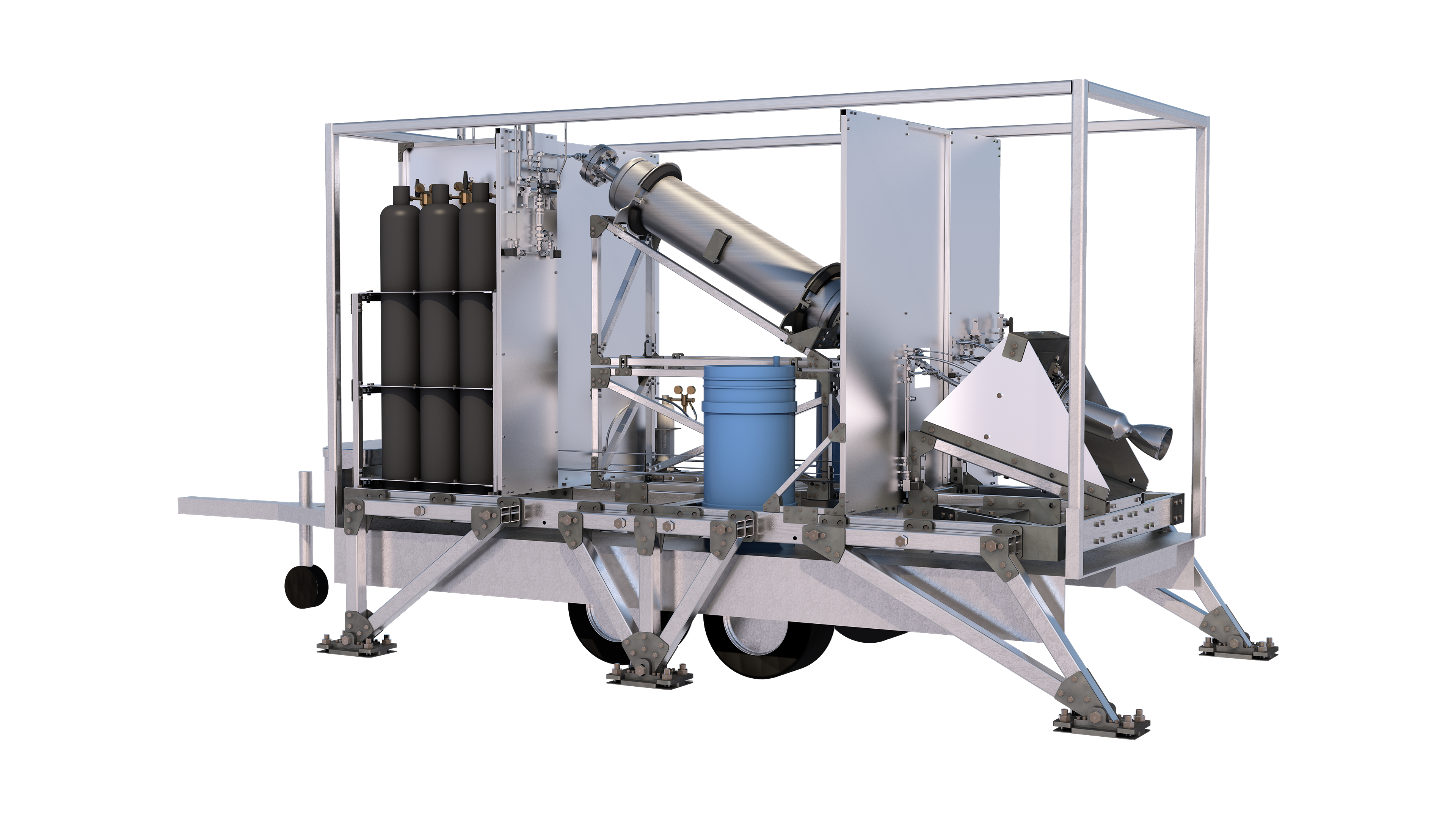 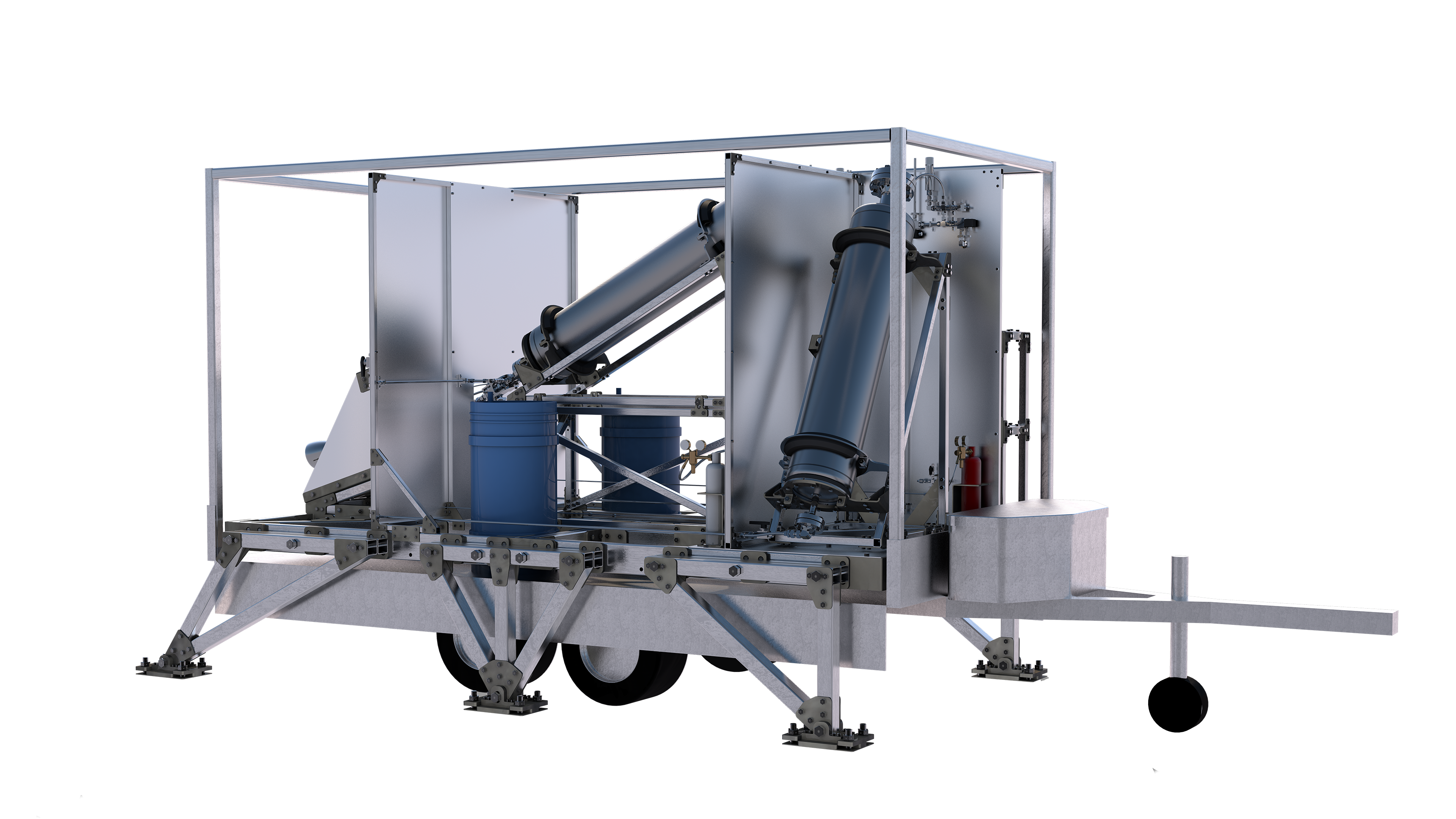 The test stand consists of four main sections, which are separated from one another by steel walls. This sectioning protects against the spread of escaping fluids and fires, any heat radiation in the event of a fire, and flying debris.

In the front section (section 1) you will find the test compartment and any dangerous substances / systems (batteries for pump tests, gas bottles for the torch igniter). The test compartment and thus the engine are angled downward at an angle of approximately 30° in order to ensure that any expelled fuel flows away and does not collect inside the engine in the event of a misfire.

The middle section (section 2) houses the oxidizer tank. It is arranged in an angled position on an elevated scaffold to ensure the shortest possible flow path without any significant pipe bends. This is particularly important to avoid cavitation (pressure fluctuations when flowing around the bend, which sometimes lead to evaporation and subsequent collapse of the liquid). In operation, the tank is mounted on four load cells, which continuously measure the tank mass and thus the mass flow into the engine. In addition, this section has space for two 200l barrels of water whose content is fed to the fire extinguishing system via submersible pumps if required.

Sections 3 and 4 can be found in the rear part of the test stand, section 4 contains the fuel tank, section 3 houses three 50l nitrogen bottles for pressurization of the propellant tanks and for supplying the nitrogen/water mist and purge systems. In addition, there are valve and switch panels for the compressed gas supply as well as the electronics and control system.

In order to handle the occurring loads, the test stand needs a stable framework, that consists of steel shaped tubes, that are bolted together using connectors. This method leads to a reduced weight, good strength and low costs. So that the trailer is not overstressed, the test stand is able to support itself by anchoring six support pillars to the ground that are capable of handling the entire load during testing. If necessary the trailer can be detached from the test stand and removed from the test site.

The piping system mainly consists of components from Swagelok. These are characterized by high tightness, compatibility and good pressure resistance. The design and composition of the system was also supported by Swagelok.

An electrical system is largely used to actuate the valves; a separate servo attachment for commercial valves was developed for this. A pneumatic system is under development for the two relatively large main valves. The electrical actuators have been in testing for a long time and have proven to be reliable when used on the existing small test stand.

In order to verify the modeling and design of the oxidizer system, the corresponding components have already been procured and are currently being integrated into the existing small test stand. To ensure reliable ignition, a so-called torch igniter (basically a small, easy-to-ignite engine that fires into the combustion chamber of the main engine), which is operated with hydrogen and oxygen, is installed. If necessary, the oxidizer system can be converted from nitrous oxide to liquid oxygen by making minor adjustments to the main valve to support future projects.

A further development of the system currently used on the small test stand is used as the control unit for the test stand. This system is able to automatically control the entire test sequence from refueling and valve control to the recording of high-resolution measurement data. The system is adapted for the use of nitrous oxide, in addition an independent watchdog system is used, which monitores the functionality of the main system and offers additional functions to control the oxidizer tank (emergency ventilation, pressure monitoring).

When developing the test stand, great attention was paid to safety. There has been an extensive safety analysis of the system, especially in relation to the involved substances and pressure-carrying systems. The oxidizer (nitrous oxide) in particular requires some measures to prevent decomposition reactions. Despite all of these measures, all processes that encurage such a reaction (refueling, test runs, ventilation) are carried out automatically or remotely controlled without the presence of personnel. For pressure-bearing systems, only tested and approved components are used and all pressure vessels are equipped with safety systems. Spatial separation and shielding of the individual subsystems as well as an extinguishing system are intended to contain or prevent fires.