Houbolt is our long term vision for the future, it is a liquid fueled rocket that reaches space. In the past, we pursued this vision as part of the Base11 Space Challenge, meanwhile we are going our own way and are working on our first liquid fueled rocket µHoubolt. Once µHoubolt and its successors had their first successful flights, we will pick up where we have left off and revive the Houbolt project.

The Houbolt rocket concept originated from the long term goal to develop and manufacture a liquid fuel rocket engine and the accompanying technology. Creating such an engine technology from scratch is no small feat and has brought a number of sub-projects to life developing sub-assemblies, small scale models and prototypes. To be able to validate behavior and test everything from different part geometries, various igniter mixtures, checklists, Firm- and Software with faster iteration times and lower cost, project µHoubolt has been started as a preliminary, smaller scale rocket. To build, test and validate the engines that go into either of these rockets, the test stands TS02-500N and TS03-24kN have been built.

The Base11 Space Challenge is a North American competition for student teams whose goal is to get students interested in aerospace and to promote new talent in this field. In order to win the competition, teams have to build a single stage liquid fuelled rocket and fly it successfully into space, i.e. to at least 100 km altitude as the first of 33 teams and before the end of 2021. The winning team wins a prize money of $1million. In addition, there is also prize money for several intermediate goals.

Participation in the Base11 Space Challenge is reserved for teams from the US and Canada. That’s why we teamed up with the University of Toronto Aerospace Team (UTAT) and took part in the challenge under the common team name Spaceport Toronto X Vienna, TXV for short. Together we wanted to win the competition and create the starting point for a transatlantic student network.

The collaboration between the teams was going well as we complement each other perfectly. The areas of expertise of the two teams differ, so the systems could be easily divided. Together, we could draw on a wide range of know-how, which is definitely needed to realize such a large project. Most of the collaboration was done via the Internet, but we were also able to get to know our Canadian colleagues personally during a safety meeting in Toronto and a hot fire demonstration in Texas. In the meantime the collaboration was reduced to occasional exchange of knowledge as we no longer participate in the Base11 Space Challenge, though we still pursue the vision of reaching space with a liquid fueled rocket.

Every space mission requires a suitable launch vehicle. Our rocket Houbolt, named after NASA engineer John C. Houbolt, is the ideal combination of simple design and innovative technology. We rely heavily on lightweight composite materials that allow us a comparatively small and therefore safer design. The requirements for a highly efficient and complex rocket engine are also relaxed. This leads to simplification of the technology and subsequently to a reduction of cost and development time. With a dry mass of only 125kg (410kg fueled) and a length of 8.5m and a diameter of 30cm, our vehicle is small and light in terms of the intended mission profile. The propellants used are ethanol and liquefied nitrous oxide, whose combustion propels the rocket with a thrust of 8.5 kN.

As the first interim target of the Base11 Challenge, a Preliminary Design Report (PDR) was written until March 2019, which among other things contains a detailed description of the rocket and its subsystems. These are briefly explained below.

The Recovery Bay includes a two-stage recovery system that allows a soft landing and makes the rocket fully reusable. The internally developed spring-ring separation system promises reliable operation, both in the atmosphere and in vacuum.

The payload bay can hold up to 5 kg of scientific payload and provides power and mounting points for experiments in weightlessness.

The Upper Engineering Bay contains nitrogen pressure tanks for oxidizer pressurization and avionics. A cold gas thruster system for controlling the roll rate is also fed from the composite pressure tanks and is also housed in this section.

The use of Type IV carbon fiber composite tanks allows a very light construction. In addition, the carbon fiber reinforced structure of the tanks is able to completely replace any additional outer shell. The tanks are arranged in a tandem arrangement.

The main parachute is a round cap parachute with a hole in the center. This type has a high drag coefficient which allows us to use the smallest possible parachute. Both the main parachute and the drogue chute are stowed in the nose cone. To eject these, the nose cone is separated from the main body of the rocket. This separation is done by a specially developed mechanism, which we gave the name “Slingshot”. A tension line goes from the lower coupler to the top of the nose cone. The top part of the tip can be unscrewed, which then gives access to a screw. By turning this screw, a disc connected to the tensioning line is pulled upwards, which leads to the tensioning of the line. As a result, the nose cone is firmly connected to the main body. When the rocket reaches apogee, the tension line is cut with two redundant pyrotechnic line cutters. The tip is then separated from the main body by the springs, which are mounted in the coupler, which leads to the ejection of the parachute.

The avionics subsystem includes all electronic components of the rocket. It controls all functions, records measurement data and communicates with the equipment on the ground. It has a modular structure and all safety-critical components are as redundant as possible (sometimes even functionally independent of the rest of the system). For high flexibility and low wiring complexity, the individual modules communicate via two redundant data buses and are powered by two redundant supply buses. The integration of new and the removal of unneeded modules is thus easily possible.

The tasks of the avionics include the control of the flight sequence, the engine and the trajectory, triggering of the recovery system and monitoring of all sensor data in order to abort the flight safely if necessary.

Communication happens wirelessly with the ground station (also via a wired connection before launch) to allow controlling the pre-flight preparations (fueling, system checks), monitoring of the sensor data and a manual abort of the flight. The radio connection to several ground stations is also used in flight to determine the position of the rocket. 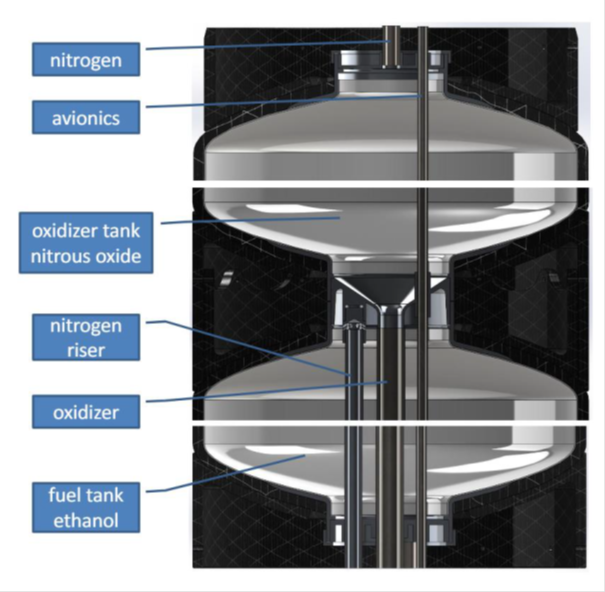 The tanks fulfill not only the task of fuel storage but also a structural purpose. In combination with the chosen lightweight materials this allows for a very light rocket. Both fuel tanks are designed as a type IV tank, this is a carbon fiber-plastic composite with a thin plastic liner inside. The nitrous oxide tank is placed above the ethanol tank, for a higher center of gravity. Since the tanks are structural components that extend over the entire cross-section of the rocket, it is not possible to easily route cables and lines outside the tanks without proper fairings. Thus, it is necessary to avoid system-critical external electric and fuel lines, since the exact aerodynamic conditions (in particular the heat input) are unknown. This means that it is compelling to route all necessary lines through the tanks.

Both tanks have several safety mechanisms to avoid a critical overpressure.

It is necessary to connect the upper and lower avionics. For this reason, a wiring duct with 6-7 mm inner diameter is installed. This tube is routed through both fuel tanks. To prevent static charge from accumulating on the walls of the tube, it is made of (slightly) conductive material such as carbon fiber or metal and is electrically connected to the tank.

In order to keep the complexity as low as possible, the propellants are fed from the tanks into the engine by means of nitrogen pressure. For this purpose, high-pressure nitrogen tanks are located in the Upper and Lower Engineering Bay. Control valves lower the pressure and direct the gas into the propellant tanks. As an alternative, electric pumps are evaluated. These are more complex than the pure pressure fed cycle, but would make the nitrogen tanks smaller, significantly reducing the mass of the rocket and making fueling easier.

The engine of Houbolt is developed in close cooperation between UTAT and TUST and combines the knowledge of both teams. Built around a specially designed injector, it will deliver an average thrust of 8.5 kN, allowing Houbolt to accelerate to Mach 4.5 in 58 seconds. First experiences with a small engine are already gained, which will later be incorporated into the Base11 project.

The innovation in the project is to use a “DragonScale” combustion chamber and nozzle. This is a heat-resistant carbon fiber-metal composite material developed by the TU Wien Space Team in cooperation with the Institute of Chemical Technologies and Analytics. Carbon fibers retain their exceptionally high strength at well over 2000°C, provided they are protected against oxidation. This function is taken over by a matrix of refractory metal in which the fibers are embedded. A suitable combination of the two components produces a material that combines the outstanding properties of carbon fibers with those of metallic materials. To manufacture this material, a pre-treated carbon fiber fabric is brought into the desired shape and fixed on a 3D printed mandrel. Through a multi-stage process, the desired metal is now introduced between the fibers in a galvanic bath and produces a stable workpiece. With the removal of the mandrel and subsequent postprocessing, the manufacture of the component is completed.
Some nickel-based prototypes have already been manufactured in the lab. First tests show promising results regarding the desired material properties. The aim is a high-temperature material that can be used, inter alia, for combustion chambers and nozzles of rocket engines.

Attitude control is achieved by the interaction of two different systems.

The gimbal provides control of the trajectory and stability. Based on the principle of the gimbal ring suspension, two custom-made electric actuators are arranged such that they control the two rings in a decoupled fashion. This allows the engine to be swiveled in all directions, allowing Pitch and Yaw to be independently controlled.

To control the roll rate another system is needed, the cold gas thruster. This system consists of 4 small nozzles that expel nitrogen to apply torque to the rocket. Since the fuel tanks are also pressurized by nitrogen, there is no need to carry an extra tank.

Every rocket needs an engine and for our 100km mission we need a big one – the largest ever designed and built in Austria, to be exact. The design of such an engine requires a particularly safe and reliable test environment. For this reason, we are currently working on the development of a large testing facility. Safety is a crucial factor in the design. In order to adapt quickly to new test scenarios, we have designed a mobile test stand that allows us to always choose the best location for a test. Also, elaborate preparations can be done directly in our workshop, instead of at the test site, providing better and faster access to tools needed. The test stand can also be used for a variety of different test scenarios, for both cold-flow and hot-fire tests, with different engine types, from liquid fuel engines to hybrids, and even solid propulsion systems. Furthermore, the provision of a test facility will allow further aerospace projects to be realized, which will particularly benefit the education sector. This will strengthen the European Space Effort and enable the development and testing of larger Austrian rocket engines.

A video of a presentation of the project was recorded at the Space Event 2019 (German only):