After a night of electronic and separation test preparations, the rocket STR-06 “Watney” finally got to do the “Vol simulé” – the final test. This test is intended to be a simulation of the rockets whole flight meaning the launch, rocket separation, chute release, and landing were all simulated in order for Watney to receive the final permission to launch.

Watney managed to pass all of the required tests without any problems and by noon, the monitors in the control room indicated that STR-06 Watney, the second rocket of its category, had the permission to launch. 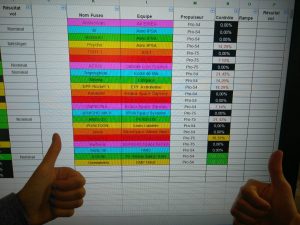 Launch time was set for early afternoon. After some lunch before the launch the team tackled the final preparations for the flight, one of which was to increase the weight of the whole payload (by using 500 gram of sweets). This addition was due to the fact that Watney had a slightly too high end velocity in the simulations. After weighing the rocket, charging the batteries, folding the parachute, and preparing the separation mechanism, Watney was ready to be brought to the launch site. The team was driven in a military van to the launch site where the security team and pyrotechnicians were waiting.
Following the launch protocol, our team set up Watney in the ramp and gave the pyrotechnicians the immaculate instructions on how to activate the board computer (Pull out the rope and run). The team leader stayed at the launch site since he had the privilege to start the rocket while the rest of the team made their way back to the safety zone, 500 meters away, in order to man the ground station.
The team waited until the pyrotechnicians inserted the rocket’s motor and switched on the board computer, upon which they received the radio signal from the rocket itself that Watney was ready for launch! With the weather situation at hand it was simulated that Watney would climb up to 2000 meters with around 800 km/h. 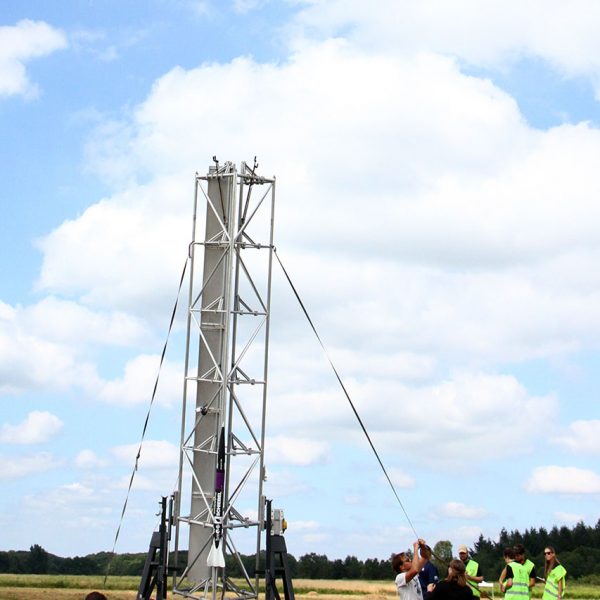 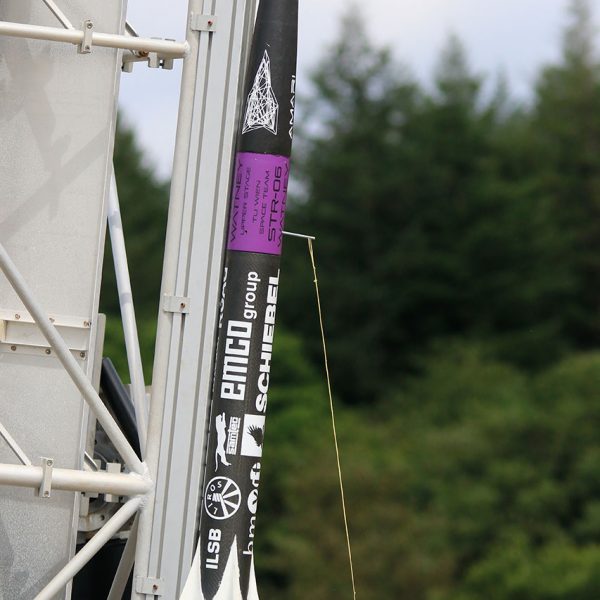 The next few moments passed quickly and from the loudspeakers one could hear the words “Three, Two, One, Ignition!”. A loud grumble could be heard from the launch site and Watney shot into the air. The rocket climbed and climbed with a breathtaking velocity until the clouds rendered it impossible to follow it’s trajectory with the naked eye.
The silence among the team was ear shattering since despite there not being any data on the rockets flight yet, it was already apparent that the velocity and altitude of the rocket far exceeded that of the simulations. Seconds felt like hours while every eye was straining to catch a glimpse of Watney falling back through the clouds. There was no guarantee that the rocket would fall back at a controlled velocity as indicated in the simulations.

But finally! A faint object could be glimpsed and it was obvious that Watney not only managed to separate, but the small parachute was out and managed to control the rocket’s fall back to earth. 150 meters above the ground the main parachute opened, as planned, and Watney glided back to earth around 1 kilometer away from the launch site. The happiness among the team was impalpable.
After the launch of another teams rocket our team got the permission to go retrieve Watney, which was easily done since the GPS coordinates sent by the board computer were fairly accurate. Watney was found undamaged in a cornfield. 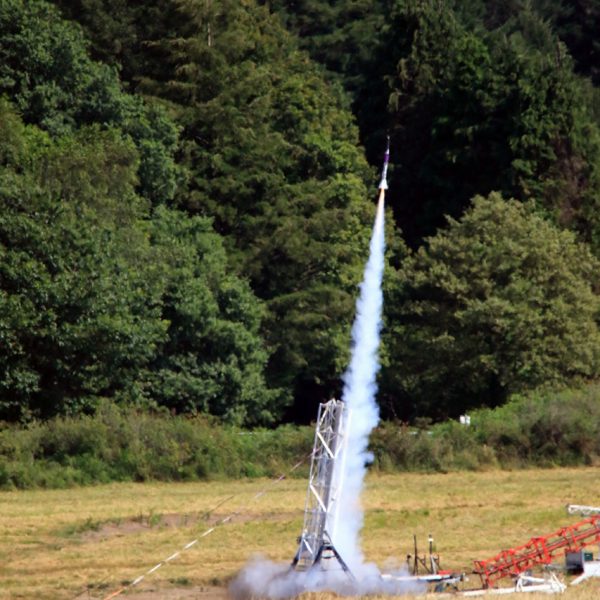 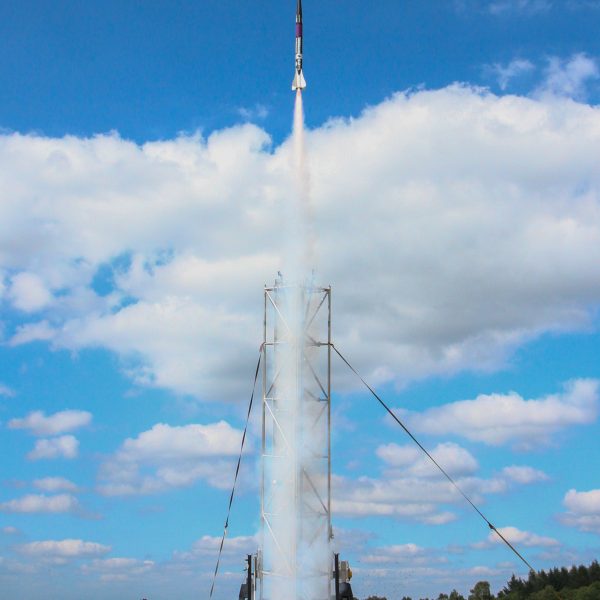 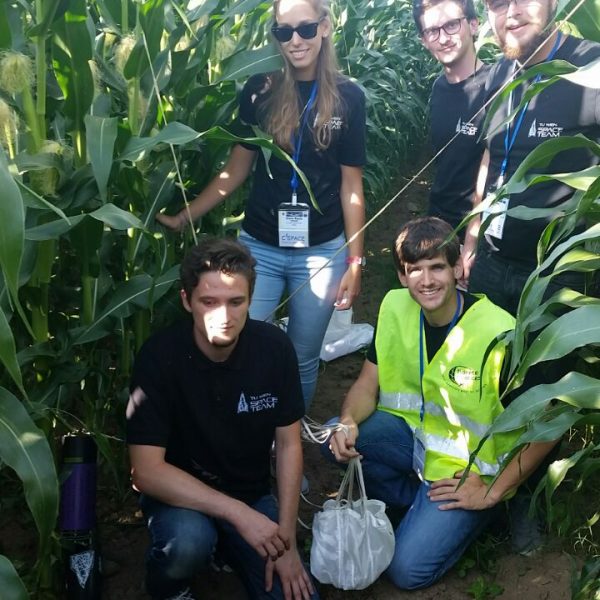 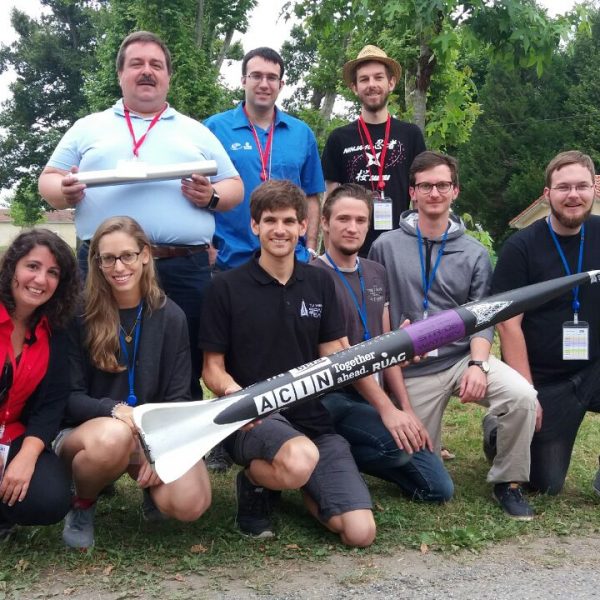 The complete data analysis indicate a maximum altitude of 2830 meters with a maximum velocity of 1062 km/h. STR-06 was subjected to 50g and the whole flight took around three minutes, 21 of which was the rocket’s climb.

No other rocket at the C’Space 2016 competition could top these values. This flight was the maiden voyage of the newly developed separation mechanism and it set an internal record for altitude and velocity (though the velocity record was broken again by the time this report was written).
The whole experience was in every way unique and everyone who participated will definitely always remember this day in a positive way.