Since the “SpaceTeamSat1” Kick Off in August 2020, some significant steps in the development of our CubeSat could be made, which we want to present in this blogpost.

As previously announced, our first review – the Preliminary Design Review (PDR) – took place in October 2020. So in autumn, we were still working intensively on the elaboration of our mission, which included the definition of the different subsystems of the satellite. During the 5-hour PDR, which was conducted with Space Team members, as well as external experts, we received many comments and many important aspects were pointed out. The main points were to question the educational payload – which was based on the Arduino platform until then – again in terms of accessibility and usability for students of AHS and BHS. In addition, the concepts for our subsystems were too complex and thus not reliably applicable for space applications. For these reasons, the mission/concept was revised again. See the updated page for more detailed information on the revised CubeSat mission.

After this, in early 2021, we had another review where we presented our adapted mission and described and discussed the main changes in a bit more detail. This time we focused on the main properties and presented a high-level concept of our mission. The educational payload of our revised mission is now a Raspberry Pi, on which students will be able to run Python code to read out sensors and cameras on board the satellite. We hope that this choice will make our project even more accessible to students, and that it will help us inspire the next generation of space and science enthusiasts.

In the development of our CubeSat we will hold several reviews in the future to be able to analyze the progress a bit more precisely and also to critically scrutinize our subsystems. Another important step in the realization of our mission is a High-Altitude Flight, which we would like to perform before a launch into space. The CubeSat platform and the infrastructure – i.e. the ground station and the entire RF communication link – will be tested under real conditions. The CubeSat will be attached to a weather balloon or similar and flown to an altitude of several kilometers. Of course, a similiar scenario, as it will be the case in orbit, will be performed during the High-Altitude Flight. At the moment we are still in the planning phase – more details will follow soon.

Since our concept was approved by external experts, we decided to start with the development of the Electrical Power System (EPS) and the Communication and On-board Computer (COBC). The background is that these two systems are mission-critical and thus require significantly longer and intensive testing. In addition, the dataflow and the architecture of the entire CubeSat mission should be defined at the earliest possible stage. These three points will be discussed in more detail below.

In order to define the dataflow and the software architecture, we started to recreate the dataflow of our CubeSat as a game. This means that different people within the dataflow take on the role of the individual subsystems and then decide how to deal with the data. This process can be compared to ESA’s Concurrent Design Facility. The following figure shows the game board, which we created due to the ongoing pandemic on the online platform miro. 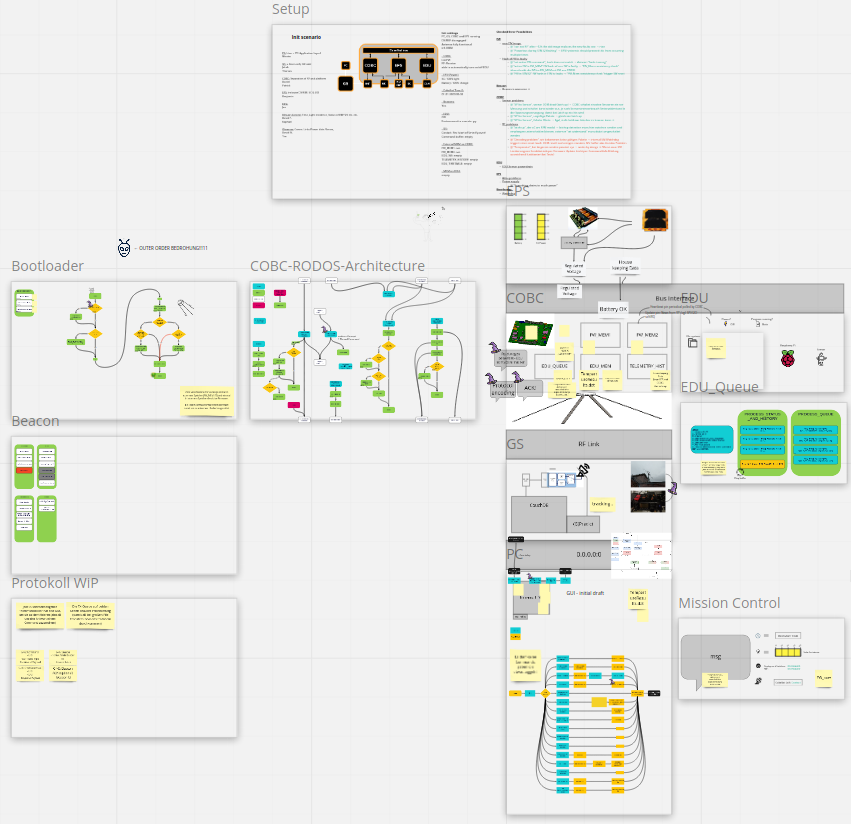 Through the Dataflow Game we found out which interfaces, etc. are necessary to send data from the ground station to the CubeSat and also to get data back successfully. At the moment we have defined all the important data types and scenarios and are therefore busy with the documentation so that we can start into a review again soon. In addition, we will test the dataflow for errors – for example, no solar power, etc. – within the review in order to put the current concept to the test.

The current EPS concept has already been approved in a review and is therefore ready to be evaluated in more detail. Compared to the former concept, for example, it was decided not to provide power supplies with multiple priorities. The task of power management was thus outsourced to the COBC. This approach should increase the testability and reliability of the EPS. At the moment we are busy building a prototype and testing its functionality. Special attention is given to the LiFePo battery cells and their characteristics. We are also in contact with other European universities and their space teams to get their feedback on our EPS design for further development. 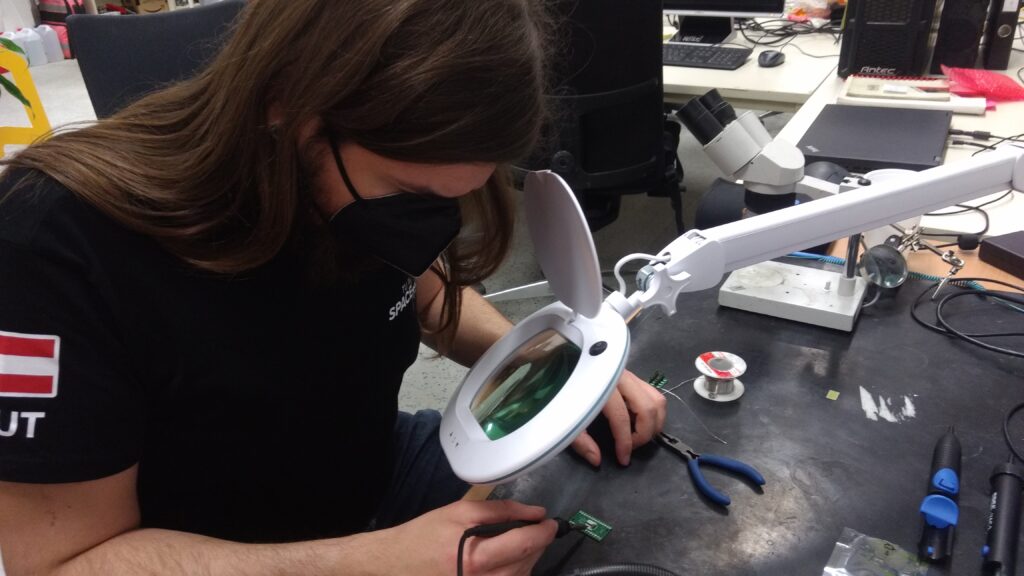 In the meantime, we have decided to use the STM32 family as the main processing unit. This allows us to use a Real-Time Operating System (RTOS). Currently we are evaluating the operating system RODOS (https://gitlab.com/rodos/rodos), which was developed by the DLR and the Julius-Maximilians-Universität Würzburg specifically for satellite missions. First tests make us confident that RODOS is a suitable choice for our CubeSat mission.

Our next goal is to develop a Flat Sat* by the end of 2021, on which we can simulate various scenarios of our satellite mission. Of course, we will also build a CubeSat model to take into account electromagnetic influences of the subsystems. We are confident that the Flat Sat Platform will allow us to evaluate our dataflow concept and to thoroughly test our entire satellite platform.

Just these days we received the notification of the Small Satellite Conference 2021 (https://smallsat.org/) that we are allowed to present our mission with a poster at the – unfortunately again virtual – conference. More information will follow shortly.

* Flat Sat is a design where all subsystem PCBs are openly placed on a mainboard. This allows for easily accessible measurements. Thus the system can be analyzed well and different scenarios can be simulated.