SpaceTeamSat1 (STS1) is the current CubeSat project of the TU Wien Space Team. Our goal is to develop and operate a 1U CubeSat and give pupils in Austria the possibility to run self-developed software on the educational payload of the satellite. The payload consists of a Raspberry Pi with various sensors and cameras, which can be accessed by the pupils’ self-developed code. The pupils will have the opportunity to develop their software code in close collaboration with the TU Wien Space Team. After successful validation of the code, it will be transmitted via RF communication from a ground station to the satellite, which will execute the code and transmit the results of the experiments back to the ground station. From there, the (processed) data is handed over to the students. The data can then be analyzed and presented by the pupils in the final step. Since STS1 is the first CubeSat of the TU Wien Space Team, which will be completely developed and operated by the TU Wien Space Team, special emphasis will be put on building up know-how concerning the development, operation and legal steps of a satellite mission in the elaboration of the CubeSats mission.

More detailled information is provided in our PDFs linked below.

Excitement and enthusiasm for engineering and science are important features of a progressive society. They are a consequence of the urge to explore the universe, which is deeply rooted in human nature. Nowadays, space technologies enable humankind to satisfy this urge and reach out further than ever before. However, even though space technologies are deeply ingrained within pop culture and organisations like NASA, ESA, or SpaceX successfully conduct widely publicized missions, a hands-on approach to these topics seems out of reach for most people. Therefore, we want to provide an entry point into space technologies for students of secondary schools by giving them the opportunity to run their own software experiments on our self-developed CubeSat platform, which is “Made in Austria”. We hope that this will broaden their educational horizon and thus inspire the next generation of space and science enthusiasts.

While many secondary schools offer courses or extracurricular activities that focus on satellite engineering, e.g. CanSats or the assembly of ground stations, these projects usually stay close to ground. With our CubeSat education mission, the TU Vienna space team wants to enhance this approach and tackle the challenge to perform various experiments in space, enabling students to participate in a space mission that actually orbits our planet. Therefore, our goal is to develop a 1U CubeSat platform, which allows students of secondary schools to access a set of different sensors connected to a Raspberry Pi. Consequently, students are able to write their own software experiments in Python and exploit the possibilities of sensors in space.

In this context, participation happens at different stages: For one, students are getting in contact with Python, which also allows an easy step into software engineering paradigms. Moreover, our team will pose some challenges, such as re-doing an earlier satellite mission and giving impressions about how CubeSats can be used, e.g. to combat climate change. Moreover, the participating students also have the possibility to design their own experiments independently of the proposed challenges.

Further enhancing this educational mission, participating students are also invited to work on hardware topics. Participating schools of general education will receive pre-assembled Raspberry Pi HATs, allowing them to focus on the coding challenge while using the scientific challenges as a starting point for their final thesis. Meanwhile, polytechnic schools are encouraged to assemble the printed circuit boards (PCBs) of the educational payload module by themselves. Moreover, there is the possibility of building a SatNOGS ground station to receive data from our CubeSat and other satellites. This also enables students to get an insight in satellite communication. It needs to be considered that the whole project follows a modular setup, due to the fact that the combination of all individual tasks is (most likely) not realizable within a single school year. Thus, schools are also encouraged to individually select appropriate tasks.

The STS1 mission is also not our first educational project: We are already collaborating with the European Space Education Resource Office (ESERO) as our team is launching CanSats for a CanSat competition. In this sense, it can be seen as an extension of our educational program. Based on that, we believe that this education mission has a lot of potential to bring something that is currently out of reach for most people, outer space, closer to a demographic with a lot of talent and enthusiasm for engineering and potential future engineers.

In the following, the individual components of the CubeSat mission are presented. This part of the homepage will be updated regularly and therefore you will always find the current state of development here (Current status: April 2021).

The three most important subsystems on board of STS1 are: the Electrical Power System (EPS), the Communication module and On-board Computer (COBC) and the Education module (EDU). The EPS is responsible for power generation and distribution. The COBC is the main processing and scheduling unit of the CubeSat and also handles RF communication. The EDU runs the software experiments provided by each student team. For this purpose, this module is equipped with several sensors, including two cameras.

The Figure aboves shows the basic system architecture of the CubeSat and the associated ground infrastructure. The Antenna System (ANT) is used to communicate with the COBC, which contains the RF module for receiving and transmitting data. The Solar Cells (SC) are directly connected to the EPS and are used to harvest electrical energy. The main Ground Station (GS) can be accessed from any PC on Earth via Internet. The Umbilical Cord Interface (UCI) allows us to re-program the COBC and charge batteries, which are operated by the EPS, after assembling the CubeSat. The Deployment Switches (DS) and the Remove-Before-Flight pin (RBF) ensure that the CubeSat is not powered in the safely stored configuration (e.g. in the chassis of the carrier rocket or in the extractor of the International Space Station (ISS)). Within the EDU module, the Camera module (CAM) can receive image acquisition commands.

The Electrical Power System (EPS) is responsible for the continuous generation and provision of electrical power at a single, unregulated voltage level. Energy is harvested solely through solar cells. Excess energy is stored in batteries, in order to continue to power the satellite in orbit sections without light incidence. The EPS also contains system level safety features, like the Remove-Before-Flight pin (RBF), the Deployment Switches (DS) and a Deployment Timer (DT). All of these features shall prevent a premature activation, while the CubeSat is still mounted on the launch vehicle. Housekeeping data like battery voltage, battery temperature, etc. is collected by the EPS, and made available to the COBC subsystem through a housekeeping data interface. 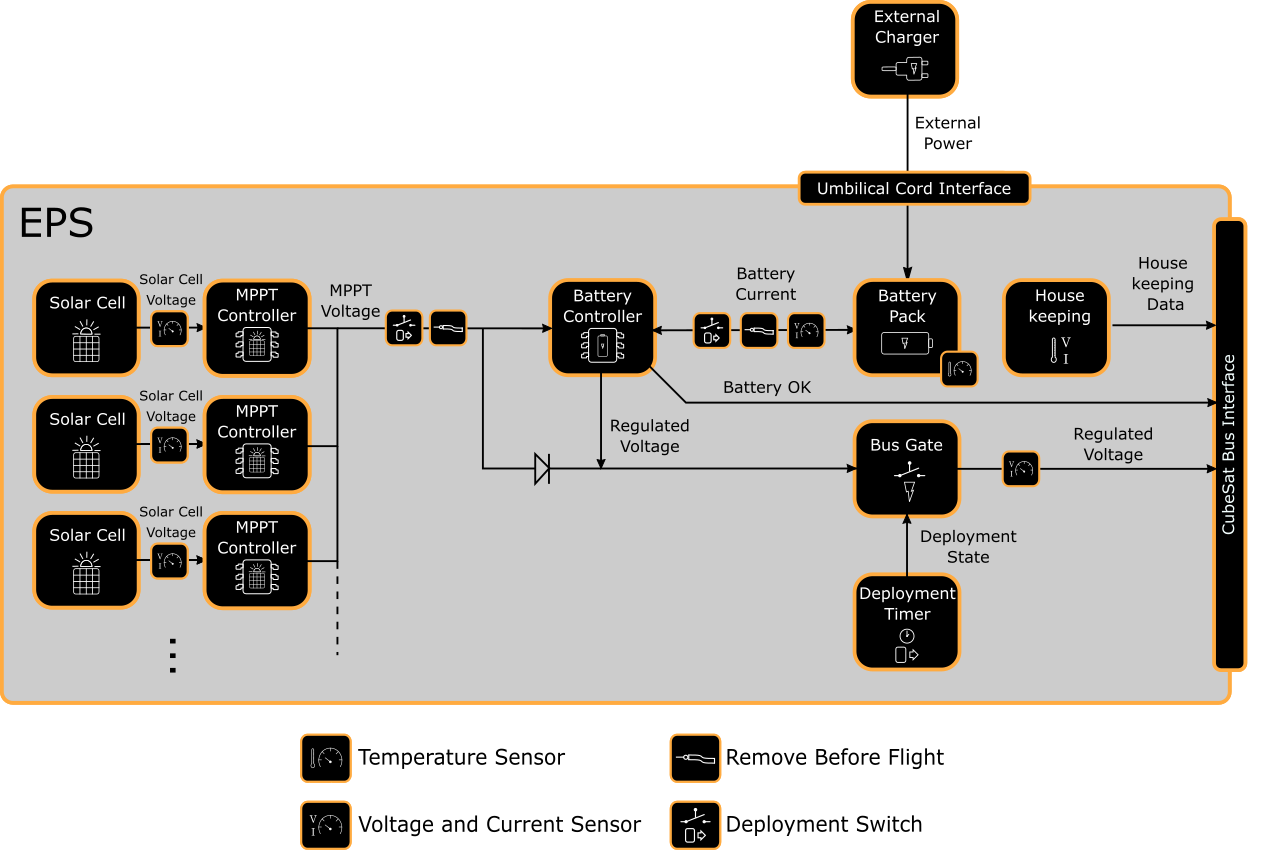 The COBC of the CubeSat STS1 combines two classical subsystems which are key components in every satellite platform: the Communication module (COM) and the On-Board Computer (OBC). The COM is responsible for any received and transmitted data and the OBC mainly schedules any activities on the CubeSat. Additionally, the OBC acts as the master module of the CubeSat platform by managing memory access and operating the EDU. The Microcontroller Unit (MCU) is the COBC’s core and handles the entire dataflow on board the CubeSat. As we are using RODOS as operationg system we are using a STM32 microcontroller. The STM32 and RODOS is analyzing incoming and preparing outgoing data from and to the RF module, managing all data access – read, write and erase – to the external memories and handling data exchange with the EDU module. The external memory consists of flash and FRAM memories, where dedicated data are being stored. For the RF module we are considering modules from niceRF.
At moment we are verifying the external memories and RF modules on our first protoype platform. 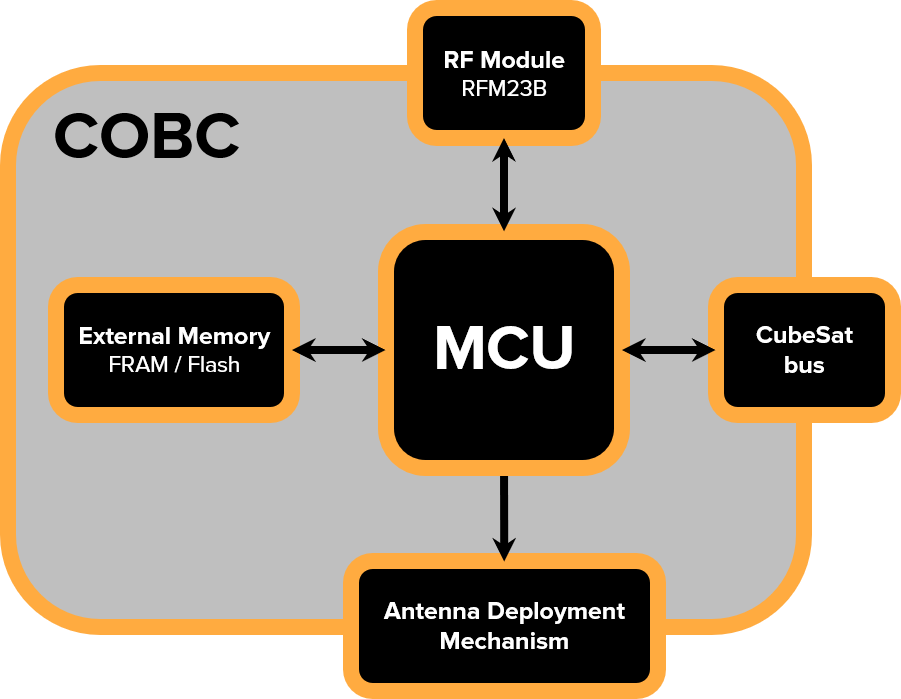 The education module (EDU) is the platform on which students can run their software experiments. It consists of a Raspberry Pi which has access to various sensors, including two cameras. The generated (and processed) data can be downloaded via a command. After a successful download, the data will be processed and handed over to the student teams to analyze it. The CubeSat is designed such that the EDU module is an independent payload, i.e. the CubeSat is fully operational without the EDU module or in the case of a complete failure of the module.

The EDU module of STS1 uses the popular Raspberry Pi platform. This will lower the entry barrier, both for teachers and students, as lots of resources about the platform are freely available on the Internet and some participants will already be familiar with the platform. In addition, we will try to keep the coding experience as accessible as possible by hosting workshops and providing libraries for the most common operations on the EDU module, i.e. for sensor readouts and standard commands for data processing. Furthermore, the Raspberry Pi platform will allow students to code their own software experiments in Python, which is nowadays one of the most popular programming languages (according to https://www.tiobe.com/tiobe-index//), especially for trending fields such as data science or machine learning. Thus, any familiarity with Python will greatly benefit the students in their later academic or professional careers.

Sensors under current consideration for the EDU are: temperature sensor, magnetic field sensors, acceleration sensors, gyroscopes, GNSS receiver, cameras, strain gauges, brightness sensors and a radiation sensor. Possible student experiments with these sensors are for example mapping the radiation environment of low Earth orbit (LEO) or determining how fast the CubeSat is spinning. 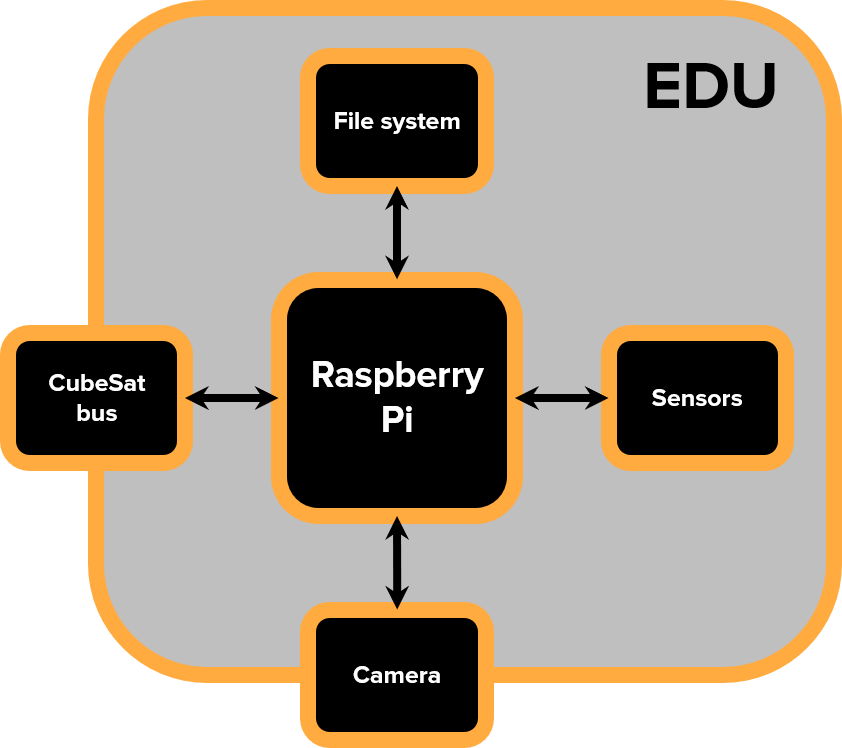 Detailed documentation of the dataflow-game and addtitional thoughts regarding this topic (Version 2.0, August 2021):