In this weeks Video we focus on the avionics of our rocket “The Hound”. For a successful high altitude flight the onboard electronics has to identify and act on every phase of flight correctly. There are lots of crucial components involved to ensure the proper function during our record-breaking flight.

Christoph Fröhlich is going to tell you about our in-house developed electronic system that will hopefully bring us to the edge of space!

„Hi, my name is Christoph Fröhlich and I studied Automation Technology at TU Wien. I’m part of the TU Wien Space Team for a couple of years now and I’m involved in the project The Hound from the beginning on, where I’m now responsible for the electronics and the flight software.

The main purpose of the onboard – electronic system is to perform the staging, the ignition of the upper stage, triggering the recovery system and locating the rocket after landing. Furthermore, it should record all sensor data for post processing and analysis of the flight. Therefore, we developed a system on our own, consisting of a board computer, which is placed within a stack of several auxiliary boards and with the radio module attached on top of it. This system evolved over the last years and for several hardware generations. It already performed test-flights up to an altitude of 6 km. For example, this year we have successfully launched five rockets with this electronic system onboard. 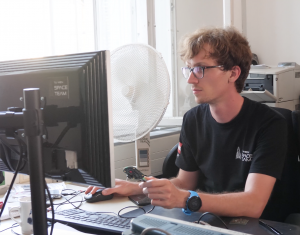 The heart of the boardcomputer is a Cortex-M3 controller with several sensors attached to it, like accelerometers, gyroscopes, magnetometer and a pressure sensor. Additionally, it houses a GNSS module, which helps us to locate the stages after the landing. The system can fire up to 5 igniter channels, which can be independently configured. We use these channels to ignite pyrotechnical charges, which actuate the staging and the separation mechanism. Furthermore, we ignite the rocket engine of the upper stage with one of them.

To transmit live data from the rocket we use a radio module based on the LoRa-standard at the 433 MHz frequency band and peak power of 1 W. This gives us a constant downlink of important data during flight and will transmit the landing position. Additionally, we use a self-built APRS radio module at 144MHz and a commercial satellite communication module at the L-Band as a backup.

The operator at the ground station can check the status of the rocket before lift-off and all relevant data are visualized by a Matlab GUI during the flight. In addition to that we will place five independent ground stations as data logger spread over the launch site to gather all transmitted data in case of a connection loss of the main ground station.“