If our rocket performs as we expect, we reach an altitude that is beyond the “von Karman line”. A rocket which has to fly up to the desired heights experiences lots of stresses that don’t need to be considered for lower altitudes. These include the mechanical and thermal stresses at hypersonic speeds, engine ignition under reduced pressure, and apogee detection in a vacuum, to name a few. To overcome these problems, many components needed a special design.

Our head of mechanics, Andreas Bauernfeind, will tell you about the design, manufacturing and testing of the rocket that shall break records. 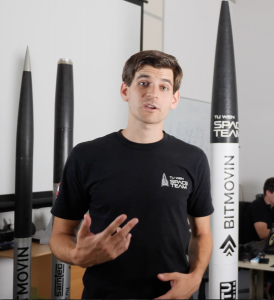 “Hi, my name is Andreas Bauernfeind and I’m a mechanical engineer. For more than 3 years I am a member of the “TU Wien Space Team”. Currently I am the vice president and the head of mechanics in our project “the Hound”. As head of mechanics, I am responsible for the design, manufacturing and assembling of our rocket.

Today I want to talk about two topics. The first topic is about the components of our rocket, the second one deals with the test flights that we have already performed. As we have already mentioned before, we have a two-staged design. Each stage has the same design principle. The biggest a heaviest parts are the motor casings, which are also part of the airframe. The outside diameter is equal to the biggest diameter of our rocket. On the bottom of our rocket we mount the fin can and the tail cone, on top of the motor casing there is the electronic bail. The drogue and the parachutes are placed inside the nose cone. 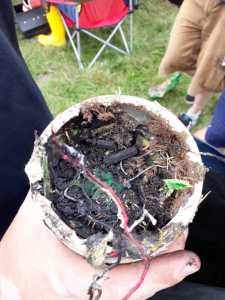 The second topic I want to talk about are test flights. Up to date we have performed 5 test flights, one single-stage and four two-stage flights. During the testing, two major issued occurred. The ignition of the upper stage turned out to be more difficult than expected, this event is crucial for a high altitude flight. The other problem was mal function of the booster. In one of our test flights, the parachutes deployed during the staging. The parachutes got damaged and the booster landed hard. The electronics have been a little bit toasty, but with minor changes we could fix the damage*.

Besides this test flights we have already tested our electronic revisions on other rockets. In total we have performed more than 15 test flights in the past two years. You can watch most of the videos on our youtube channel.”