we have received numerous questions about our work during these tough times, which is why we would like to take the opportunity to talk about the situation in our team.

The ongoing SARS-CoV-2 epidemic and its consequences on the general public have not spared the TU Vienna Space Team. The good news: Our team members are all in good health. We closed our office and workshop for normal activities several days before the restrictions were imposed by the government and cancelled appointments such as project meetings at headquarters. Nevertheless, we still continue working on our projects from home, with some limitations and more focus on their theoretical aspects.

In order to give interested followers and our supporters a better idea of our progress during this time, we asked our project leaders to give short statements regarding the course of their various projects, which we would like to share now:

“Due to the current situation the flight test programme is on hold and future test flights are impossible until summer. This means that we did not pass all milestones. As a consequence, the next record attempt in Nevada this Autumn appears to be unrealistic at this time.

Because the international Spaceport America Cup was cancelled, too, an European-wide initiative of Student teams was born to find an alternative launch site in Europe. The first commitment of an European Space Port for a launch in the end of 2020 is given, it remains thrilling!”

“The Houbolt project team is mainly working on designing a small liquid fuelled rocket named µHoubolt. It will act as a test bed to gain experience with scaling down a liquid propulsion system and integrating it into an airframe, as well as the procedures required to prepare and launch such a vehicle. As part of that design process, many tests of various subsystems have to be performed, some of which have already been prepared accordingly.

Simultaneously the team worked on upgrading the small test stand in order to get it ready for tests of a new rocket engine in the thrust range required for µHoubolt.

Since the current restrictions prevent any work from being done in the workshop and at the test site, finishing those tests and upgrades had to be postponed. The time is instead used to work on the theoretical aspects of the rocket design and the design of the large test stand, but the missing test results and workshop access will lead to delays, affecting the completion of the designs and fabrication of hardware.”

“As already communicated in one of the Social Media posts, we have re-designed the chassis of DISCO One. Unfortunately, at the moment the machines of our sponsors are also standing, so we have to be patient for a while to get the engineering model made of aluminium. Furthermore we are working on the software, which unfortunately cannot be tested at the moment. As soon as HQ’s gates are open again, we will be able to start our software tests. Nevertheless we use the time to document, which is quite good for our Technical Handbook.

“The STR-10 Team had planned to have begun with the construction of the rocket by now. Instead, we utilize the additional time to focus on the theoretical aspects of the project. The flight event in Leipzig will not take place in May. It is not yet certain whether the C’space event in France this July will be delayed.”

“Currently, the Cansat 2020 competition, which was supposed to take place from 21.4 to 24.4, has not yet been postponed. We think this will happen in the next days and hope that there will be an alternative date in autumn.”

“Fortunately, project FIRST is hardly affected by the current measures against COVID-19 since the launch day was already on March 1st. As for its next installment, planned for this fall, we are confident that the corona crisis will have been resolved by then and don’t expect any restrictions.”

We appeal to everyone out there to follow the current “rules and restrictions” in regards to their everyday lives, so that we all may return to work and resume our normal lives soon. We wish all readers and their families good health. Looking forward to seeing you again after the crisis has been overcome!

On behalf of the entire TU Wien Space Team

P.S.: If you have further questions regarding the work of the TU Wien Space Team, please refer to our office address office@spaceteam.at.

Thinking back to the beginning of the year: The TU Wien Space Team in January, before Corona forced us to close down our facilites: 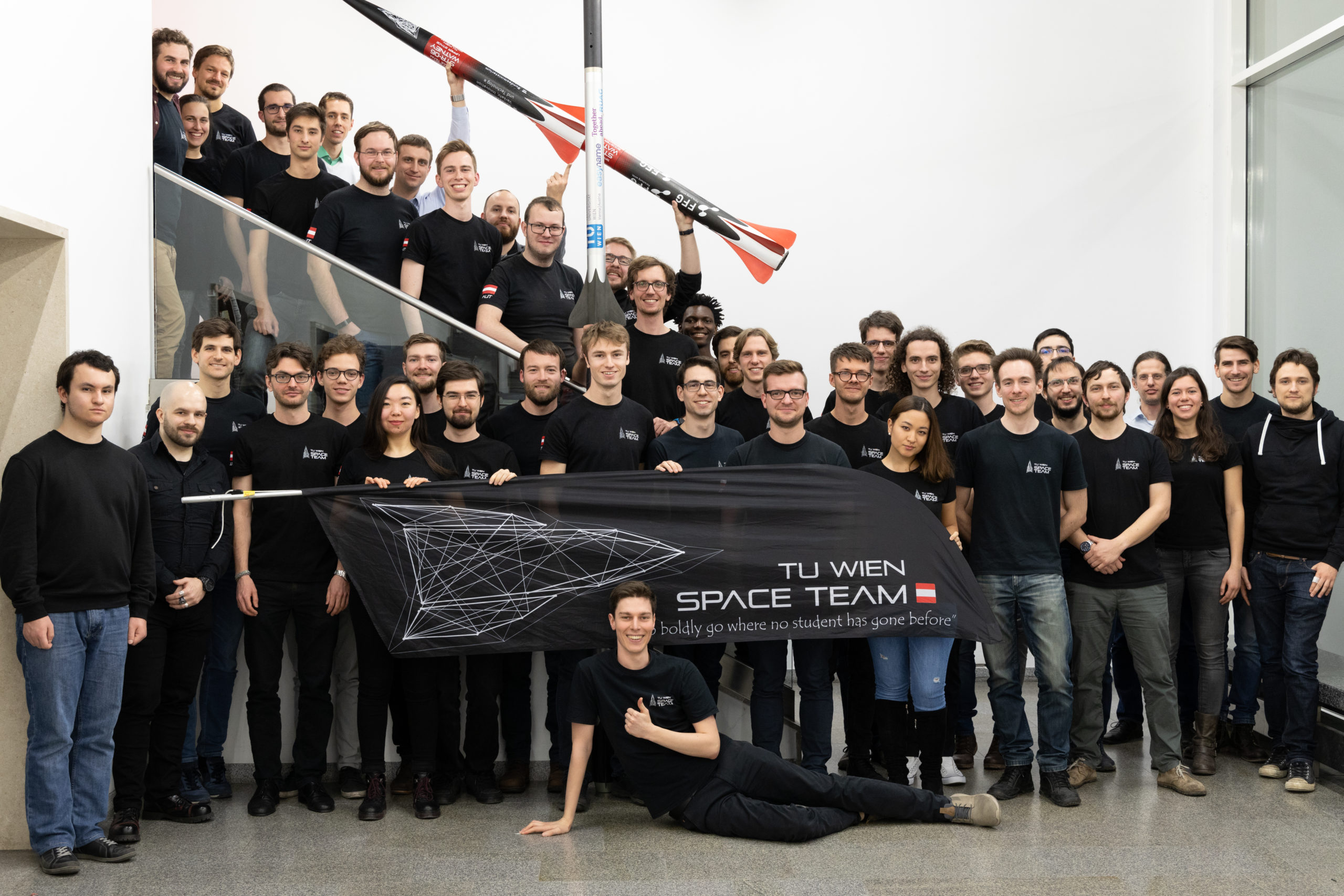