The last test series ended after the structure of TS-02 was inaugurated in February 2020 with several hot-fire engine tests, in which the remaining hardware of TS-01 was combined with the new engine “Amalia”. The engine was designed for use with the oxidizer nitrous oxide and will power µHoubolt after some modification. Until now, the hot fire tests have been carried out with a mixture of oxygen and nitrogen which has a similar performance to gaseous nitrous oxide, while at the same time offering simpler handling as well as lower risk and cost. Only small modifications to the engine were necessary for this.

The following video shows one of the last test runs utilizing that oxidizer: 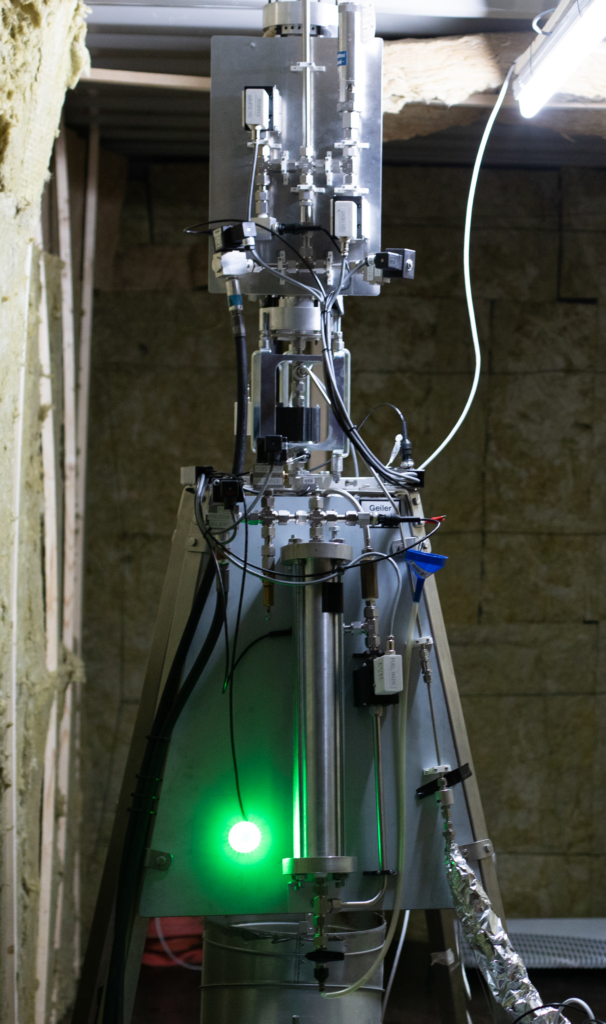 After these tests, the test stand was dismantled, only keeping the structure untouched while the tanks, piping, valves and electronics were upgraded to get to the current version of TS-02. This was necessary due to the switch to the pressure-liquefied oxidizer changing the requirements for the oxidizer system significantly from those for the old system. The fuel system was also renewed with the installation of higher quality components in order to increase the reliability and flexibility of the system. The photo on the right shows the test stand after the modifications.

Additionally, an oxidizer tanking system had to be built in order to move the pressure-liquefied nitrous oxide from a commercially available gas cylinder into the oxidizer tank on the test stand under pressure and bring it to the right temperature.

Over the past few months we have conducted many tests, in which the tanking system and its interaction with the test stand have been examined and improved. As a cheaper and safer substitute for nitrous oxide, CO2 was used, which has similar thermodynamic properties compared to nitrous oxide thanks to also being a pressure-liquefied gas with a similar critical point.

After a long fight against software bugs, leaky connections and sticky valves, the test stand was finally placed in our testing container last week in order to carry out cold-flow test runs (tests with non-combustible propellant combinations and/or without ignition) under realistic conditions. In addition to the actual hard- and software, we also started testing and improving our procedures, checklists and safety precautions. Four test runs were carried out, a compilation can be seen in the following video:

The tests were a great success and gave valuable insights for future tests. A subset of the recorded pressure data can be seen in the following figure, the graphs of the four individual tests were superimposed. The measurements had remarkably little run-to-run variance. The deviations that can be seen in the data of the “fuel tank” sensor are expected, as they are caused by the sinking pressure of the compressed gas supply which is unable to pressurize the fuel tank as quickly as in the run before. This pressure drop does not cause any problems as it is well within our allowed parameters. These tests speak for the reliability and precision of the test stand, the oxidizer tanking system, as well as our soft- and firmware. 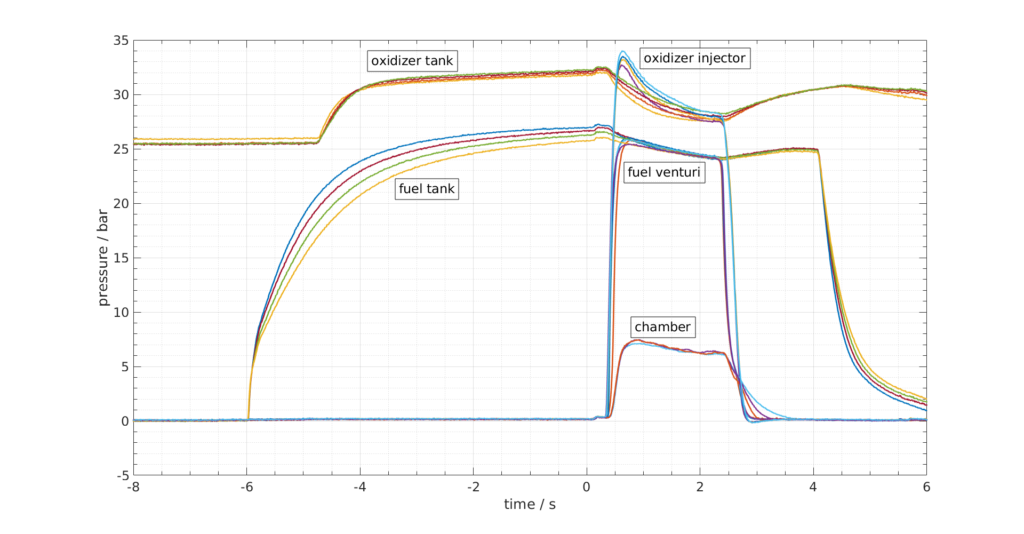 Based on the results of this test day, another cold-flow test is planned to validate procedures and settings that were slightly adjusted after the last test to be ideally prepared for the first hot-fire tests with nitrous oxide that will follow in a few weeks. The results of these tests will then be used to finalize the design of the propulsion system for µHoubolt in order to be able to start manufacturing components.