The Hound, a two-stage rocket with commercial off the shelf motors that was built to bring the European altitude record to Vienna. After two unsuccessful attempts in 2018 and 2019, the third one was planned for 2021.

But an attempt in 2021 wasn’t in the cards, as we were still not able to travel to the US due to restrictions.

So we put the available time to good use by performing further test flights in Europe, because despite the successful flight in Portugal in 2020 there was still some room for improvements.

In June and November 2021 we conducted two successful two-stage flights in Poland, and raised the team-internal altitude record on European soil up to 11,800 m. Furthermore, we attended a launch event in Italy in October 2021 not only for testing but also for team member onboarding and teambuilding.

Our Polish colleagues conduct regular rocket launches in Poland, more specifically in Drawsko Pomorskie. This site (340 km²) belongs to the Polish Army and Air Force since 1946 and has also been used by NATO since 1996. This facility is internationally known as DPTA – Drawsko Pomorskie Training Area.

The Hound was prepared in a two-stage configuration with an Aerotech M1297 motor in the booster stage and an Aerotech L1420 motor in the sustainer. Amongst others, an important test objective was a new parachute deployment mechanism for the main parachute of the sustainer stage: the retained main parachute was to be released by a linecutter and then ejected by means of a spring mechanism. 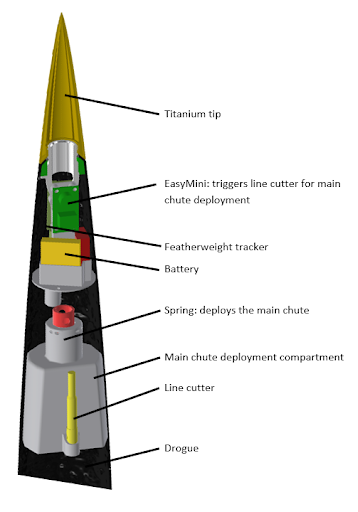 The intention here was to increase the reliability and repeatability of the recovery system.

Despite a bad weather forecast – rain and winds at ground level as well as hurricane-force winds at 10 km altitude – we decided to conduct the launch. To calculate possible trajectories, we used a newly developed software: DIANA enables dispersion analysis bbased on OpenRocket. This enables us to estimate possible landing points with the forecasted wind conditions and we could optimize the launch rail setup. 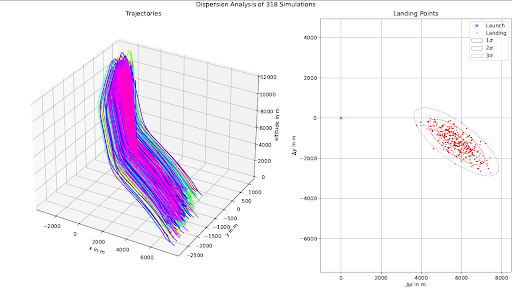 The launch was a success, and the sustainer stage reached an altitude of 9,800 m.

Due to the high wind velocities combined with the horizontal trajectory of the sustainer stage at apogee, the parachute deployment mechanism was destroyed by the high apparent forces during the deployment of the drogue parachute. 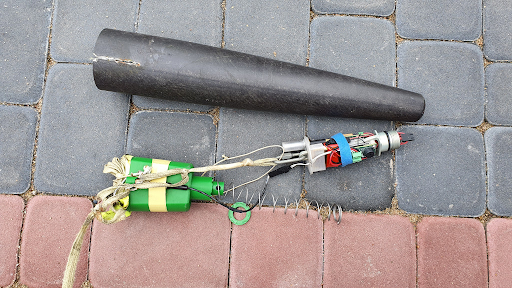 As a consequence, the main parachute got stuck inside the nose cone and the stage descended with only the drogue parachute limiting its speed. Luckily, the sustainer stage landed on top of a tree without incurring further damage. From now on, climbing gear and pruning saws will be standard equipment for launch events at this venue.

In October we decided to visit a launch event in Italy, having the onboarding of new team members and team building in our focus. 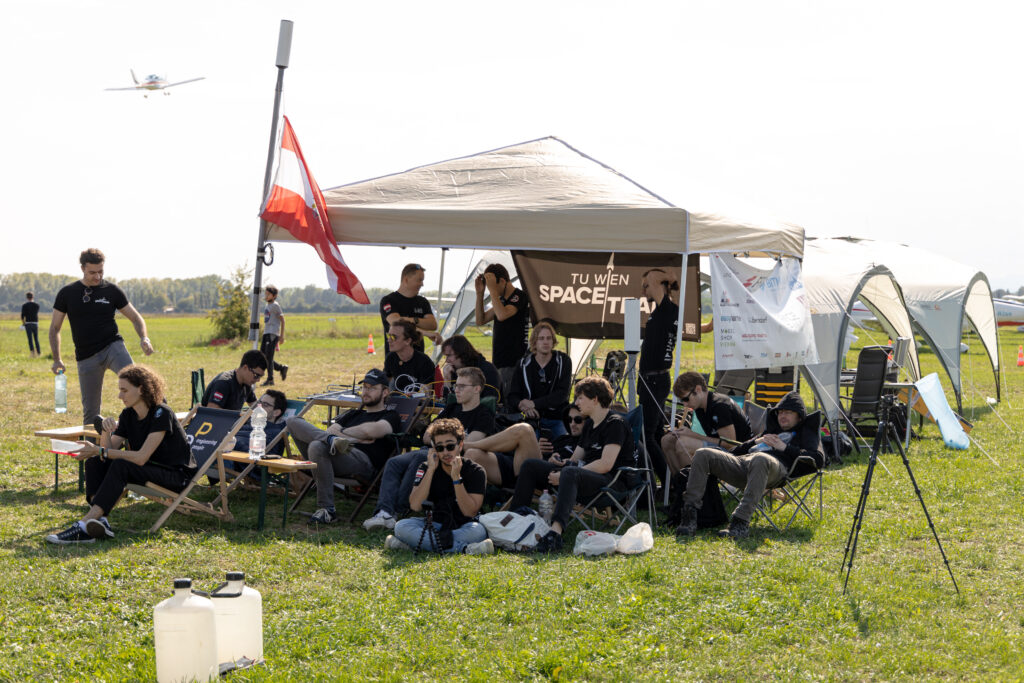 At this event, a test airframe of the sustainer stage of The Hound was launched. The most important test point was a reworked recovery concept, because the spring mechanism did not prove to be reliable at the last test flight in Poland. With the new layout, the main parachute is not kept inside the nose cone anymore, as was done earlier, but held back in the coupler (stack cup) and until released by a linecutter. The test was a success, and this deployment concept was adopted for future launches for both stages of The Hound. 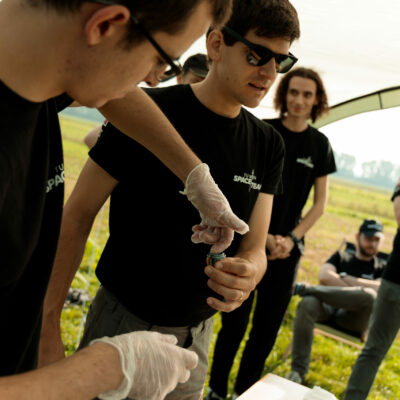 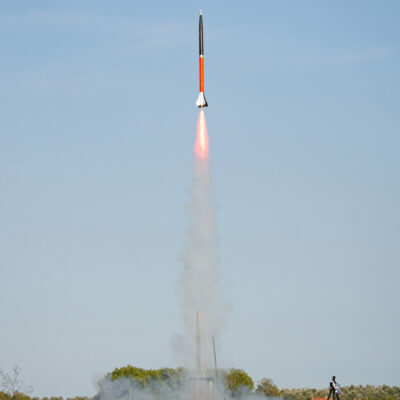 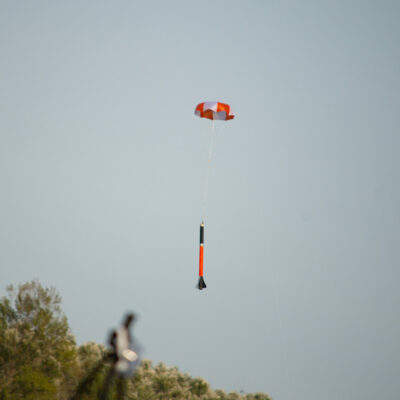 In November, we took up another opportunity to launch The Hound on the same location in Poland. 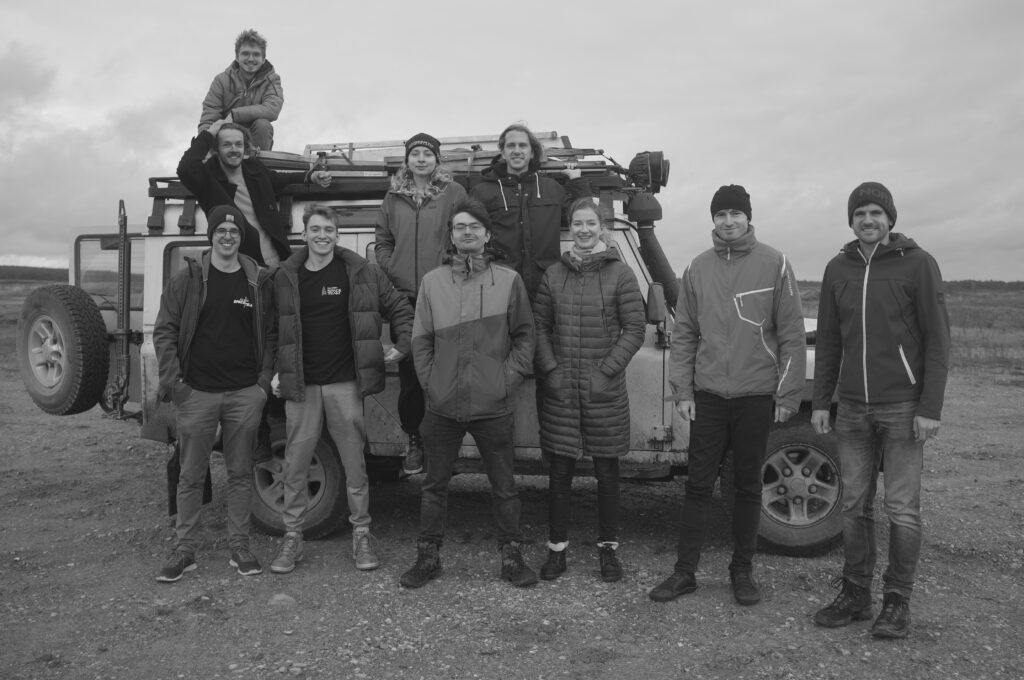 In addition to further telemetry tests, the newly adapted recovery concept was tested on both rocket stages. The following picture shows the main parachute, protected by a fireproof deployment bag, dual redundant linecutters, and triple redundant deployment charges. These charges eject the nose cone from the airframe and release the drogue parachute. Because this happens at an altitude of more than 10 km, special measures have to be taken for them to work reliably even at low air pressure. 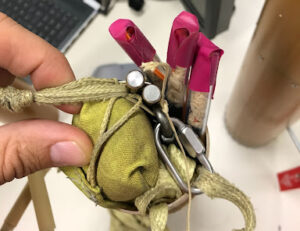 The booster was equipped with a Cesaroni M2245 motor and a Cesaroni L585 was used in the upper stage. The following picture shows The Hound inside the launch tower during final preparations before starting the countdown for liftoff. 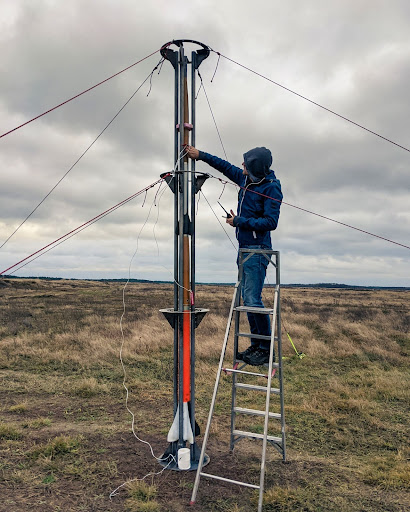 Liftoff and ignition of the upper stage motor were performed successfully!

The upper stage reached an altitude of 10,800 m, which marked the team-internal altitude record on European soil. This time, both stages landed in tree crowns and required climbing for retrieval. 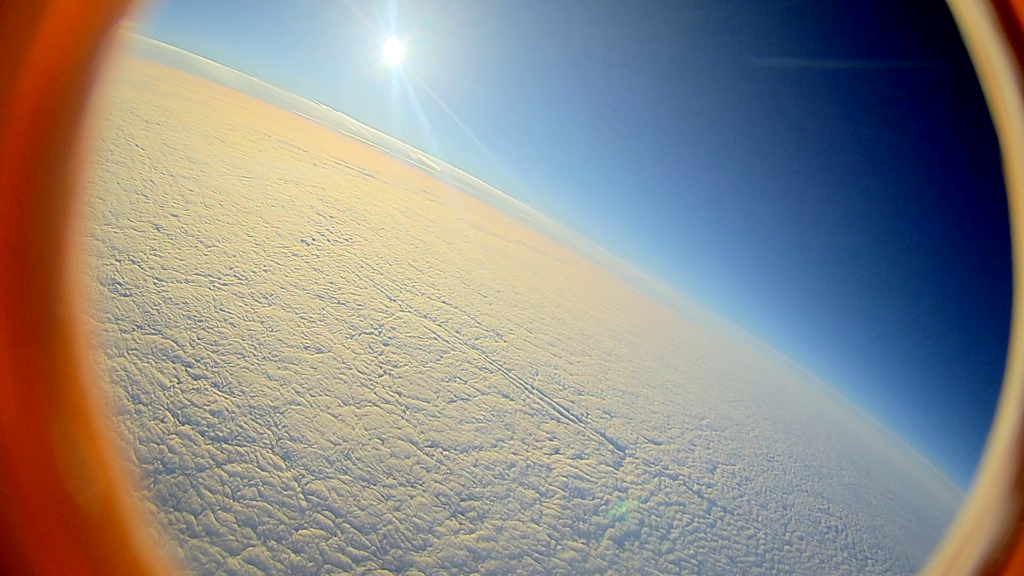 Another test point was a localization system, which calculated the position of a radio module by means of several spatially distributed ground stations. The so-called Time Difference of Arrival system (TDoA) relies on a principle similar to GNSS. The following pictures show the flight trajectories of both stages.

Picture 2: Calculated height by the TDoA system compared to the GNSS height. 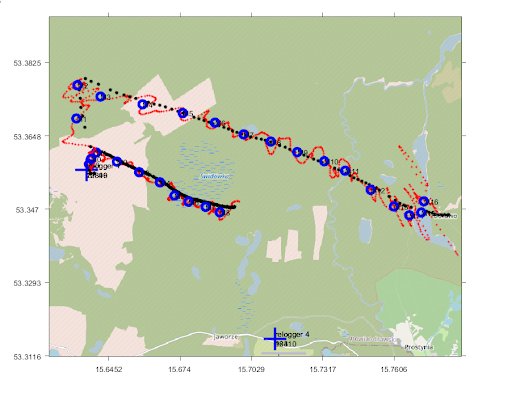 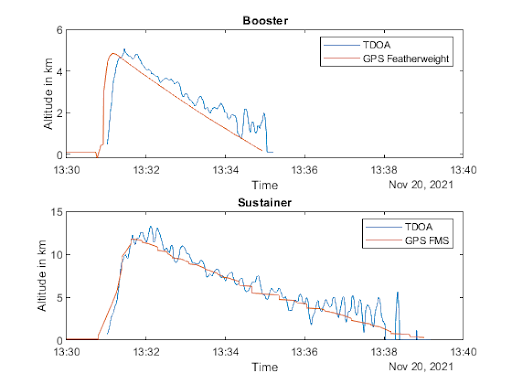 Summarized, this system can significantly contribute to the localization of the rocket stages at the landing point in case the on-board GNSS receivers are unable to provide valid position data. Similarly, the maximum altitude at apogee can be calculated by this system even without having GPS position solutions (refer to COCOM limits).

The successful test flights in 2021 motivated us for another record attempt with The Hound in its full configuration.
Because the travel restrictions were lifted, we are planning for an attempt in the US in 2022. As soon as we have received FAA approval, we will update you with further details!